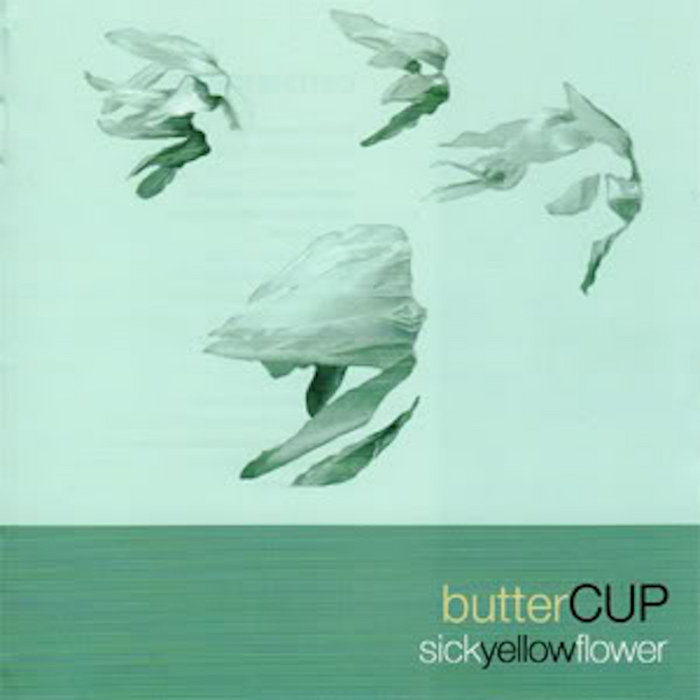 Priced low, but you can pay more if you want to share your largess with Buttercup. Buttercup priced this record so low, so that poverty or dire financial situations will not be an impediment to you enjoying this music. Buttercup simply wants you to have this record, long now out of print!

To get the sound Buttercup wants for a song, they will bang on cookie cans, play broken ukuleles, or scrape car keys against piano strings. When these myriad noises are stirred, boiled down, and garnished by the attentive hands of the band and producer Mark Rubenstein, the result is Buttercup's disc, Sick Yellow Flower, an ambitious and eccentric, but never self-indulgent, debut.


Quintessentially a San Antonio band, the members of Buttercup have roots in the local scene and perform in other groups. Bass guitarist Odie Cole and drummer James Roadman are in the blues-rock outfit Los Mescaleros, guitarist and lead singer Erik Sanden plays in The Mechanical Walking Robot Boy, and guitarist Joe Reyes was nominated for a Latin Grammy for his work with duo Lara and Reyes. Yet, Buttercup is the culmination of their shared talents: a San Antonio supergroup. Their music is experimental indie-pop, catchy but challenging, and performed with a remarkable degree of musical skill.

In its current lineup since 2002, Buttercup hadn't recorded anything but home demos until 2003. James Wilton, a friend of the band, provided the impetus - and the funds - to begin making an album; he dumped $100 in change on the stage at one of their performances, and announced it was the beginning of their recording fund. "When Wilton dropped the money, and said you guys should record, then we started taking it seriously, and started doing preproduction work for the record." says Reyes.

The band went to work with Rubenstein, a musical veteran who guided Buttercup through the recording and production process. Sanden is quick to credit Rubenstein for his contributions, especially for the overall feel of the album. "It's a document of how we sound."

Yet, the band encountered several setbacks in making that definitive record. Originally, the band holed up in a San Antonio studio to make the album, but the experience was nearly fruitless. "We went to a fancy studio, at $85 an hour. We got there and found out that the studio was in a state of disrepair," says Sanden. "We were led to believe that the system we were going to use was ProTools, this fancy cutting-edge program, but the version they had there was ProTools Jr., the free version that you get off the Internet. And Mark came, and he was aghast".
Nonetheless, the band recorded 22 songs, many of which were unusable. Salvaging what they could from the studio sessions, Buttercup started from scratch to make their first album at Reyes' home studio.

"In essence, I think we really wanted to come out with a bang and have like a really bold statement record ... but those turned out to be the ones that weren't recorded as well," says Reyes.

The result of their home recordings, Sick Yellow Flower, contains songs their website describes as "quite thick, including string arrangements, horns, and lots of piano" and others characterized as "virtually live takes, the only overdubs being percussion and backup singing."

"Cutting Daisies," Sick Yellow Flower's opening track, shines with grand arrangements, while the following cut, "Twin Cities," sounds muted and intimate by comparison. Some songs are precise in their composition, and others leave much more to chance. "Epithalamium" is a sweet, straightforward pop ballad, whereas a disjointed and loose feel pervades "Parallax View," a song Sanden describes as "swimming through black Vaseline."

To unite potentially incongruent songs into a cohesive whole, Rubenstein and the band used the less-is-more approach. If a song needed a string arrangement, it was added, but if the song sounded powerful enough without tons of overdubbing, synthesizers, or multiple guitar parts, it was left alone. The best way to hear this aesthetic at work is to listen to the eight-minute "John Glenn," Sick Yellow Flower's opus. A song that potentially could have been drenched in layers of instrumentation was recorded with just guitars, drums, and vocals. "It would have been so easy to cop the whole space thing, and do like the filters on the voice, and get a Moog and make all the spacey sounds, but 'John Glenn' was perfect; it didn't need it" Reyes says.

To record Sick Yellow Flower, the band had to choose 12 songs from Buttercup's repertoire of about 60. "The wealth of material wasn't a problem, it was just kind of like editing it down to the best stuff" said Reyes. While recording, the band was surprised that they preferred the feel of such quieter songs as "Nov. 1" to louder, more up-tempo songs like "Johnny Appleseed."

"I think ultimately it worked out best," says Sanden, "because I think the record is really moody in a way that reflects better what we do and what we are." •