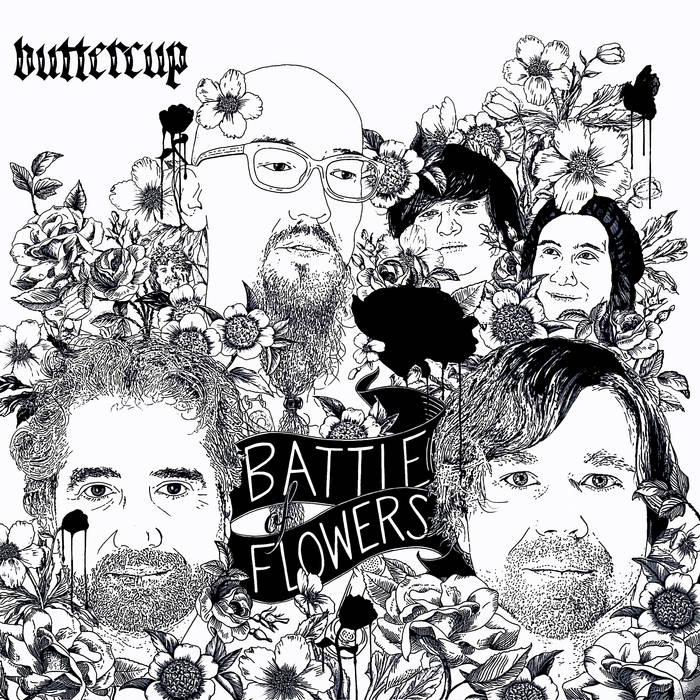 Priced low, but you can pay more if you want to share your largess with Buttercup. Buttercup priced this record so low, so that poverty or dire financial situations will not be an impediment to you enjoying this music. Buttercup simply wants you to have this record, our very best yet.

THE PRESS WEIGHS IN:

“like Lou Reed fronting a great Psych Band…. may be their best ever ” - I Don’t Hear a Single

“Satisfying our urges, Buttercup spares nothing, and allows us a look at everything.” – Impose

“the best thing Buttercup has ever put out, dynamic and bursting at the seams with pure rock and roll bliss.” – San Antonio Current

“pops and crackles with wit” – A Pessimist is Never Disappointed

“every song has a strong hook” – Colorado Springs Independent

Brothers Emilio and Diego Navaira played drums and guitar on Battle of Flowers, but just as the record was finished, the Navairas’ other music project, The Last Bandoleros, was chosen not only to perform on Sting’s latest recording, but they were also asked to provide direct support for Sting’s spring 2017 US/European tour. The sons of Tejano music legend Emilio Navaira Sr., the brothers added some South Texas muscle and musicality to the Buttercup sound. Sting just wanted a little bit of that too, and the band is okay with it.

Erik Sanden, bassist odie, and Grammy award winning guitarist/producer Joe Reyes have spent over 15 years as members of Buttercup, at once a full-on rock machine and a performance art collective. Over the course of 6 albums, a documentary DVD, and countless genre-bending live shows, they’ve remained current and vital despite shifts in music tastes and technology. Battle of Flowers is their first recording to consist totally of live takes recorded in the band’s rehearsal studio. Guitarist Joe Reyes says “with the extra guitar, keys and vocals, expertly played and sung by Diego and Emilio, this was the first time we could actually perform and record all of the parts of a song live. And then, like The Beatles, I’d turn one of the monitor speakers towards us and we’d sing all our parts together on one mic. We worked fast and had fun and you can hear that on the record. Larry Crane did a great job mixing what is essentially a live record.”

Bassist odie adds “It’s how recording should be done. Just push record and go. For us it’s the most organic thing.” Sanden agrees wholeheartedly, “Headphones are like a barrier: it feels so much better when you take them off. A band that is free from care is the best possible band it can be.”

Already, folks are saying this is Buttercup’s best album to date.

produced by buttercup
recorded in the summer and fall of 2015 and spring of 2016 at gud'eenin studios, san antonio, texas
mixed by larry crane at jackpot! in portland, oregon
mastered by garrett haines at treelady, pittsburgh, pa

art and layout by chris sauter